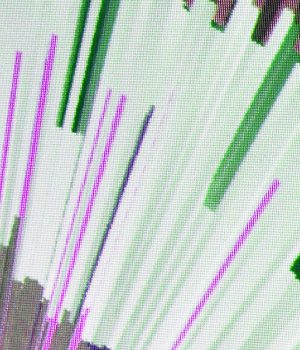 Our story so far…  We moved our office at the end of May, but our communications services were not established until mid-June.

At about 9am on June 14 – our re-scheduled installation date – I called CenturyLink to confirm the technician’s arrival time.  “Between 10am and 12 noon,” I was assured.  When I called again at about 3pm, they confirmed that a technician had in fact been dispatched.  A few minutes later, the CenturyLink truck pulled up and I intercepted the technician as he was inspecting the side of the building.  Expressing frustration with the state of the outside wiring, he said that the first installer and one of his colleagues had both taken early retirement, leaving just two installers for our area.

At that moment, a second CenturyLink truck pulled up, and as the two technicians conferred, I overheard that neither of them knew that the other one was coming, and that neither of them had the hardware they needed to complete my installation.  Undaunted, the first technician dismissed the second one and sheepishly asked whether I would be here the next morning (Yes!), and then asked me to lead him to the indoor telecom patch panel was so he could complete his pre-installation inspection.

Here’s where I reveal a guilty secret: prior to my move, and before I found out that I had been calling the “wrong” CenturyLink office to schedule install my new service, I placed a $100 deposit with CableCo to install phone and broadband service.

When the CableCo technician visited during the last week of May to pre-inspect my facilities, I showed him the access panels to both the outdoor and indoor wiring.  Equipped with the knowledge he needed and making no further comments, he left.  But when the “right” CenturyLink office was revealed to me, my sense of loyalty to the Telco industry led me to cancel CableCo’s installation and ask for my deposit back. I was beginning to regret that decision.

As the CenturyLink installer proceeded inside to complete his inspection, I asked whether he would mind whether I followed along to watch what he was doing – explaining to him that I was in the telecom industry and knowledgeable about the Mediaroom platform that CenturyLink uses for TV.  Realizing that he was talking to a friend (sorta…), lots of revealing conversation ensued.

As he removed the cover to expose the indoor wiring patch panel, we saw that there was none – just a mass of wires.  As he organized the wires into three pairs, he informed me not to expect an upgrade path to CenturyLink’s (advertised) 100mbps service.   Having settled for 3mbps VDSL service in my previous office, I was ecstatic at the prospect of having 20mbps service at the new one.  But then again, what if I did want to upgrade to 100mbps later?

To get 100mbps service, we needed four pairs of conductors from the Calix switch providing our service.  The technician had seen this situation in our neighborhood before.  Apparently, despite an agreement with the builders of our development to equip every subscriber with four pairs of wiring, the contractors engaged by the builders installed only three.  To get to four-per-subscriber, new wiring would need to be installed for each subscriber, and capacities of the up-stream transport facilities would need to be re-evaluated, and possibly upgraded.

The agreement also apparently called for them to install patch panels, but as we saw, none were present.   Meanwhile, CenturyLink had equipped this area to handle hundreds of subscribers, but CenturyLink’s actual subscriber-count was only about two dozen, partly due to this situation.  Ceding the rest to CableCo (which doesn’t need four pairs to provide service).

To add insult to injury, the CenturyLink installers who had recently taken early retirement had been suspected of sabotaging new installations by stuffing small rocks into the wiring conduits alongside the buildings, so the wiring would not be accessible.  If true – and perhaps they were just disgruntled short-timers – it made me wonder who they were really working for.  Between possible sabotage, insufficient in-building wiring, and the lack of IT integration described earlier, the cards are stacked against any possibility that CenturyLink could do much better than it is doing.

It’s really a sad situation, and it would probably motivate the developer of this area to take some kind of legal action – if only they knew about it.   Even if I have some of the details not-quite-right, I’ve been thinking about informing the development’s management of this situation.  But how far would this information get within the developer’s organization, and will it motivate them to take action?  And if so, against whom?

On Friday June 15, we had service.  But one of the primary reasons we opted for CenturyLink service was to have line-powered phones in the event of power outage.  Because CenturyLink has fiber-to-the-premises access here (not that I’m complaining), we could need a battery back-up to preserve service unless the nearest switch has its own.  If we do need one, hopefully the charge for it is minimal.

Also on Friday I received a $100 refund check for the deposit I had made in May with CableCo for the service that we canceled before it was installed.  I had forgotten.